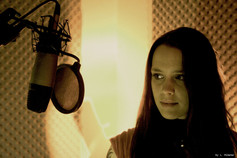 Playing various shows in and in the proximity of Berlin, members of ORPHAN HATE took notice of her distinctive, strong and diversified voice as well as her entertaining qualities.

In 2004 Sina became the singer, lyricist and co-songwriter of ORPHAN HATE, with whom she toured through Europe, released two records - “Blinded by Illusions“ (2008, Plainsong) and “Attitude + Consequences “ (2012, Kick the Flame) - and made a name for herself in the metal scene, being one of a few female vocalists, providing the whole range of styles between growling/ screaming and sore throat as well as clean vocals.

Over the years she also took part as a guest singer and/ or lyricist in various music productions, such as the current releases of JOVIAN SPIN ("Shades of Perception", 2012), DRONE ("For Torch And Crown", 2012) and HARPYIE („Willkommen im Licht“, 2013).

Today Sina works on her first solo-project GETAWAY CAR, picking up the guitar again after more than 10 years in order to write something even more personal as popular.

GETAWAY CAR gives her the chance to both enter a new world of music, emotions and dynamic, combining the elements of pop, rock, and hardrock and invite people to enjoy themselves and let their thoughts loose while listening to her music.